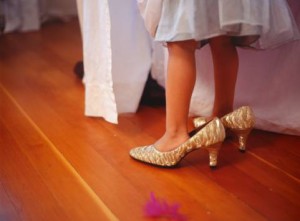 To get as many stories as we can from a variety of sources, we have built an online social media network through our website as well as through Facebook and Twitter. We have collected stories from women in Afghanistan, France, Germany, Israel, England, Wales, Australia, and the United States.

Sole Sisters is using a specially designed exhibit at public events: “a shoe confessional,” the size of a small closet, that is rigged with two cameras. In privacy, women can talk about their intimate relationships with their shoes. The confessional has been set up at society events, including the Dallas Museum of Art during the Jean Paul Gaultier tour.

We have collaborated with community partners that work with young girls, seniors, women inmates, teenage mothers, domestic violence victims, former sex-trade workers and incest survivors. This allows us to include women whose voices are hardly ever heard and far too often overlooked.

Some of the groups whose “shoe projects” we have filmed for Sole Sisters:

The University of Texas at Dallas

The University of Sheffield

For more information on how to get involved contact: